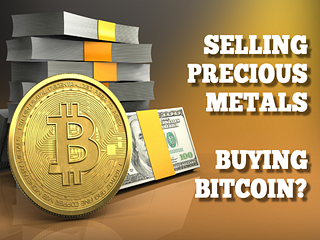 There is a new trend by individuals in the alternative media community who are now selling out of precious metals and buying into Bitcoin and cryptocurrencies. While this may seem like a good idea, especially when Bitcoin and the cryptocurrencies reach new all-time highs, it is likely a big mistake. Now, I am not saying that individuals shouldn’t invest in cryptocurrencies. Rather, it’s a lousy idea to sell all of one’s precious metals holdings and put it all into Bitcoin and cryptocurrencies.
Recently, Sean at SGTReport published a short video in which part of the headlined was titled as ‘SILVER BULL CAPITULATES.’ In the video, Sean explains how past frequent guest and precious metal analyst, Andy Hoffman, has sold out of all his silver and is now only in Bitcoin and gold. Andy explains in his interview on Crush The Street that he sold all of his silver this summer as he really has no interest in it. He goes on to say, ‘Because, in a digital age, I just don’t believe people are going to store thousands of pounds of silver hoping that the gold-silver ratio is going to come down.’

This post was published at SRSrocco Report on NOVEMBER 21, 2017. 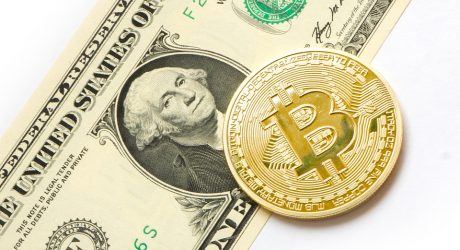 Once upon a time preppers would hoard gold and silver in anticipation of the meltdown of society, but now Bitcoin is becoming the alternative currency of choice for many in the prepping community. On Monday, Bitcoin hit an all-time record high as it surged past $8,200, and it has now gone up nearly 50 percent in just the last eight days. As I have admitted previously, one of my great regrets is not investing in Bitcoin when it first started, because we have never seen a meteoric rise quite like this. Bitcoin hit the $5,000 mark for the very first time just over a month ago, it is up more than 700 percent so far this year, and it is up almost 40,000 percent over the past five years. At this point Bitcoin has a market cap of over 130 billion dollars, and many believe that this is just the beginning.
At one time many preppers were quite skeptical of cryptocurrencies such as Bitcoin, but now that is starting to change in a major way. The following comes from a Bloomberg article entitled ‘These Doomsday Preppers Are Starting to Switch From Gold to Bitcoin’…
‘Not too long ago, people in the prepper community were actively warning against crypto, and now they’re all investing in it,’ said Tom Martin, a truck driver from Washington who runs a social-media website for people interested in learning skills to survive disaster. ‘As long as the grid stays up, people will keep using bitcoin.’
In addition to gold, silver and stocks, Martin invests in bitcoin and peers litecoin and steem because they’re easier to travel with, harder to steal and offer better protection in the event of the kind of societal breakdown that would unfold if a fiat currency like the dollar collapsed.

This post was published at The Economic Collapse Blog on November 20th, 2017.

Sound money advocates who love the concept of cryptocurrencies but don’t want to abandon precious metals have been trying to clarify their thoughts of late. Risk Hedge just helped, with a comprehensive statement of the pro-gold position. The following is an excerpt. Read the full article here.
All the Reasons Cryptocurrencies Will Never Replace Gold as Your Financial Hedge Despite what the crypto-evangelists will tell you, digital tokens will never and can never replace gold as your financial hedge. Here are six reasons why.
#1: Cryptocurrencies Are More Similar to a Fiat Money System Than You Think.
The definition of ‘fiat money’ is a currency that is legal tender but not backed by a physical commodity.
It’s clear that cryptocurrencies partially fit the definition of fiat money. They may not be legal tender yet, but they’re also not backed by any sort of physical commodity. And while total supply is artificially constrained, that constraint is just… well, artificial.

Money and Markets Infographic Shows Silver Most Undervalued Asset
– Silver remains severely under owned and under valued asset
– Entire silver market worth tiny $100 billion shown in one tiny square
– ‘All of the World’s Money and Markets in One Visualization’
– Must see ‘Money and Markets’ infographic shows relative size of key markets: silver bullion, gold bullion, cryptocurrencies/ bitcoin, largest companies, 50 richest people, Fed balance sheet, currency, stocks, property, cash, debt & derivatives
– Small allocation by investors and world’s richest will see silver surge like bitcoin
***
by Visual Capitalist
Millions, billions, and trillions…
When we talk about the giant size of Apple, the fortune of Warren Buffett, or the massive amount of global debt accumulated – all of these things sound large, but they are actually extremely different in magnitude.
That’s why visualizing things spatially can give us a better perspective on money and markets.

I have seen very big moves in global financial markets in ‘Thanksgiving week’. I will be cautious this week. Silver gets the best week to rise and zoom. I expect short covering with every rise in gold prices. Speculation that some hedge funds are exiting crude oil long positions is preventing the rise. A strong US economy implies more guzzle for fuel during holidays.
Crude oil is not falling due to the crisis in Saudi Arabia. There is media speculation that developments in Saudi Arabia can result in crude oil prices doubling over a period of time. Further chances of US dollar dumping by Opec is also catching investors. Bitcoin and crypto currencies are now the future means exchange. Paper currencies are now the past. Americans will control the crypto currencies in the near future but their grip will not be the same as that of the US dollar. Gold will be the only key means of exchange between central bankers and large investors.
The political crisis in Germany should also be bullish for gold. The German chancellor declaring its failure to form a government can put the Eurozone into further crisis. Currency markets will be very volatile and will be dependent (too a large extent) on the political scene in Germany.

Gold and silver are steady on increasing chances of the passage of the US tax cut bill. Resurgence in bitcoins and other crypto currencies is preventing investment interest in bullion. Short term hot money has moved to cryptos from bullion. The price moves in gold and silver are mainly dependent on physical demand and physical premiums in Asia.
In India I see more and more retail trading volumes in Industrial metals than gold and silver. This year’s rise in industrial metals has attracted brokers, retail traders and everyone alike. Aluminum was untouchable a few years ago and has attracted good trading volumes. Nickel’s recent breakout has also resulted more numbers of daily traders. Some of the head core silver traders have moved to industrial metals as it gives more profits than silver. A word of caution to industrial metal traders. The rise in industrial metals has been mainly on expectation that the global switch to electric vehicles can result in a long term shortage. But in my view traditional auto makers are making their vehicles more fuel efficient buy making engines from Aluminum instead of cast iron. The global switch to electric transport may not happen overnight. A sharp correction in industrial metals can happen anytime. Nickel has seen a very sharp correction over the past seven days. Other industrial metals could follow Nickel soon.
Traders will start taking positions for the first week of December from now. Geopolitical risk and political instability in the UK and some Eastern European nations can cause furor. Economic data releases from anywhere in the world will affect markets if and only if they indicate a slow down next year.

While physical silver investment demand experienced a pronounced decline this year, the volume is still much larger than the level prior to the 2008 U. S. Housing and Banking Crash. Investors frustrated by a silver market plagued with lousy sentiment and weak demand, may not realize that silver bar and coin demand is projected to be double what it was in 2007.
Thus, long-term precious metals investors continue to acquire silver on price dips while others may be selling out and placing their bets into the bubble stock market or cryptocurrencies. It’s not the larger precious metals investor who is worried about the short-term price, rather its the smaller investor.
Regardless, according to the Silver Institute’s 2017 Interim Report, global silver bar and coin demand are projected to fall to 130 million oz (Moz) in 2017 compared to 206 Moz last year. Even though physical silver investment demand will drop by 37% this year, it will still be more than double the 62 Moz in 2007:

This post was published at SRSrocco Report on NOVEMBER 17, 2017.

How this Shark Tank contestant beat 40,000 entrepreneurs to score a deal with Kevin O’Leary

What’s Going On Behind the Silver Price | John Adams

Archegos – A Week Later and What Does it Say?

Worried about mining’s lack of mineral discoveries? Don’t be