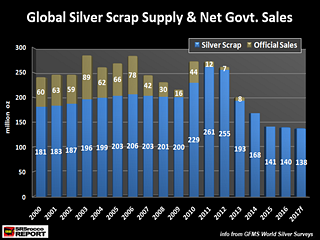 While silver investors continue to be discouraged about the low price, the market has experienced a fundamental change that needs to be understood. Ever since governments removed silver from official coinage, over 50 years ago, the market has been supplemented by several billion ounces of silver. The majority of that supply has been depleted.
The reason the United States and other countries stopped producing official silver coinage wasn’t due to any monetary conspiracy; rather it was based on a straightforward problem; supply versus demand. Because industrial silver consumption had skyrocketed after World War 2, the silver market would have suffered deficits if the U. S. Treasury didn’t sell silver into the market.
It was quite simple; there just wasn’t enough silver to go around. So, governments started to reduce, then eliminate silver from their coinage in the 1960’s. A lot of this silver, known as ‘junk silver,’ was either purchased by investors or remelted and sold back as supply into the market. While there is no way of knowing how much of the older official junk silver remains in the market, the majority of it was recycled for much-needed supply.

This post was published at SRSrocco Report on DECEMBER 29, 2017.

Traders had priced in four interest rate hikes for next year. The Federal Reserve says three. This resulted in the US dollar falling and gold and silver getting a boost. All is not over. The European central bank and the Bank of England meetings can affect the markets. America’s growth outlook for 2018 has been raised. If the ECB and BOE also raise their growth forecast for next year, then the US dollar could see another sell off and gold and silver could get back some of the lost investor confidence.
The lower base for US nonfarm payrolls for next year is 140,000. The US economy needs to continuously add 140,000 NFP every month to ensure the case for an interest rate hike every quarter. Next year there is a competition between the USA, the UK and the Eurozone on growth versus interest rate. The Eurozone has imported migrants from Africa and Asia for higher growth. Migrants will ensure that Eurozone growth beats American and UK. Eurozone member nations are distributing free money to the migrants just to support their ‘too big too fail’ corporations. This is a very disturbing practice and a self-destructive practice. Gold and other non US dollar alternates will zoom.
Everyone says bitcoin and other crypto currencies are not backed by anything. I ask everyone was the US dollar backed by anything when it started after the First World War. The US dollar is just backed by a heavily indebted nation currently. Nations are supporting the US dollar as they have invested heavily in US bond markets. If the USA sinks a lot of nations will become bankrupt. There will be mass unrest globally. With bitcoin and other crypto currencies, it is just a starting point to replace the US dollar and other paper currencies. Over a period of time as central banks start supporting it, bitcoin and crypto currencies will be backed by nation’s physical assets.

This post was published at Harvey Organ Blog on December 11, 2017.

Weekly Update
‘I went to the crossroad, fell down on my knees,
I went to the crossroad, fell down on my knees,
Asked the Lord above, “have mercy, now save poor Bob, if you please”
– Robert Johnson, 1936
Could we have reached an important crossroads in history with the announcement from President Trump that they are moving the U. S. embassy to Jerusalem? The move has been widely condemned even as it has been praised in some quarters. The move has already triggered protests, riots, and violence. Some view it as a declaration of war as rockets have been fired from Gaza. The move comes against the backdrop of ongoing Israeli bombing into Syria against military installations of Syria, Iran and Hezbollah even as there has been no formal declaration of war.
What all of this is doing is setting up the potential for a wider war in the Mid-East, a region of the world already aflame, particularly in Syria and Yemen. A wider war could eventually bring in the global powers USA (NATO), Russia, and China, all of who have military in the region and are aligned on different sides in the conflicts. Any outbreak of war could have serious ramifications for global markets. We have seen this happen before as stock markets fell on the outbreak of WW1, WW2 and the events surrounding 9/11.
Nevertheless, do markets care? It seems not. The U. S. economy is growing, 3.3% in the 3rdquarter and 2.3% year over year to the 3rd quarter. The job market continues to grow: 1.7 million new jobs according to the monthly nonfarm payrolls in the past year including 228 thousand in November, which was above expectations. The official unemployment rate, currently at 4.1%, is at a 17-year low. The stock markets are at record highs, and, while interest rates have been rising they are still lower than they have been at any point before 2008.
The markets appear to be ignoring potential war drums, political investigations, and record high debt. Some are calling what is happening in markets a melt-up (especially Bitcoin). But not everyone has joined the party. The one sector that has been missing the boat is precious metals, led by gold. Given that one sector has been on a tear and almost consistently in overbought territory now for some time while the other has been falling and is approaching oversold territory, could the two be close to changing places? Could the stock markets be approaching their zenith even as the gold and precious metals market approaches a potential nadir? In other words, a crossroads.

Gold and silver fell yesterday on a technical breakdown. Gold could consolidate in a wider $1240-$1290-$1360 range for a few months. Questions are being asked to how can gold rise? Two factors can result in gold zooming over the next few months (a) There is a clear indication that global central bankers (including the Federal Reserve) will raise interest rate at a slower pace next year. (b) There is an armed attack by NATO forces in North Korea. I will prefer to use the current correction and further correction (if any) in gold and silver to invest for next year. Option traders can invest in far dated call options in gold and silver. Silver options will be cheaper than gold options. No one is interested in investing in silver. Silver could be the dark horse of next year.
One needs to trade very carefully on the last trading day of the month and first trading day of the month.

This year’s Nobel prize in economics was awarded to Richard Thaler, a pioneer of behavioral economics. But there is a tale told by a lesser known Nobel laureate, Kenneth Arrow. As a World War II weather officer, he was tasked with analyzing the reliability of the army’s long-range weather forecasts. His conclusion: statistically speaking, the forecasts weren’t worth the paper they were printed on. Captain Arrow sent along his report only to be told, ‘Yes, the General is well-aware the forecasts are completely unreliable. But, he needs them for planning his military operations.’
Okay, maybe you don’t actually need a Nobel prize to know that rationality in the decision-making department is often lacking. Case in point: the capital markets. While subtle and ingenious in construction, the capital markets are, nonetheless, driven by the mass action of millions. They are a reflection of ourselves and necessarily express both the summit of our knowledge as well as the pit of our fears, and everything else in-between. And, this brings us to the subject at hand: Gresham’s Law. Sir Thomas Gresham was a financier in the time of King Henry VIII and his name is, of course, attached to the principle that ‘bad money drives out good money.’ Coin collectors of a certain age are familiar with the near immediate disappearance from circulation of all silver American coins once Congress had mandated the use of base metals beginning with the 1965 vintage. While all coins – silver and copper alike – carried identical legal tender value, it was the silver coins that vanished. Perhaps you are wondering what this has to do with bond investing? Everything!
Consider the state of financial markets as witnessed by metrics of implied volatility:

Submit Questions for Patrick Vierra of SBTV on Liberty and Finance

Everybody wants a goldendoodle

Is Japan’s Sun Rising Again? – The Future of Japanese Equities

How much lower can gold price go? Alain Corbani

Gold is off more than $250 from August’s record highs, but here’s why the bull run is not over

Bitcoin’s rally come to a halt due to potential regulations, 12% drop in just two days